LP Artwork: Tell Her You Love Her / Frank Sinatra 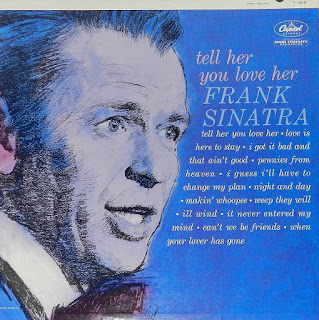 The title track of this album was originally issued as the B-side of Frank Sinatra's hit single, Witchcraft - both with great Nelson Riddle arrangements.

This compilation album bearing its name came along in July 1963, and was one of a plethora of Sinatra albums that Capitol issued to try to scupper the launch of the singer's own label, Reprise, which he founded in 1960.

The tracks were culled from three of his concept albums (In the Wee Small Hours, A Swingin' Affair and Songs for Swingin' Lovers!) plus a couple of single releases, the other being Weep They Will which originally was the B-side of (Love Is) The Tender Trap.
Posted by Todd Gordon at 07:06