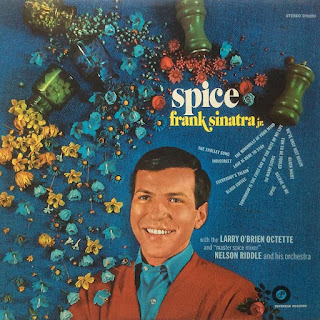 Spice was a 1971 release from Frank Sinatra Jr, one of two albums he made for short-lived Daybreak Records label (founded by  producer/composer, Sonny Burke).

Nelson Riddle provided arrangements that were more contemporary for the times, including some small group settings with the Larry O'Brien Octet and this week's program features the track Tomorrow Is the First Day of the Rest of Your Life.

Two of the songs contained on the album were written by Sinatra Jr: the title track, Spice, and my personal favourite, Black Night, with a brooding, almost menacing arrangement with a great baritone sax solo.

There's also an excellent up-tempo version of the Jimmy Van Heusen/Sammy Cahn song, Indiscreet. Originally written as the title song for the 1959 movie starring Cary Grant and Ingrid Bergman. Frank Sinatra Sr recorded it as a heartfelt ballad but his son's version works very well, too.
Posted by Todd Gordon at 08:45